PSO can be utilized in a wide variety of fields. In this example, the problem consists of analysing a given electric circuit and finding the electric current that flows through it. To accomplish this, the pyswarms library will be used to solve a non-linear equation by restructuring it as an optimization problem. The circuit is composed by a source, a resistor and a diode, as shown below. 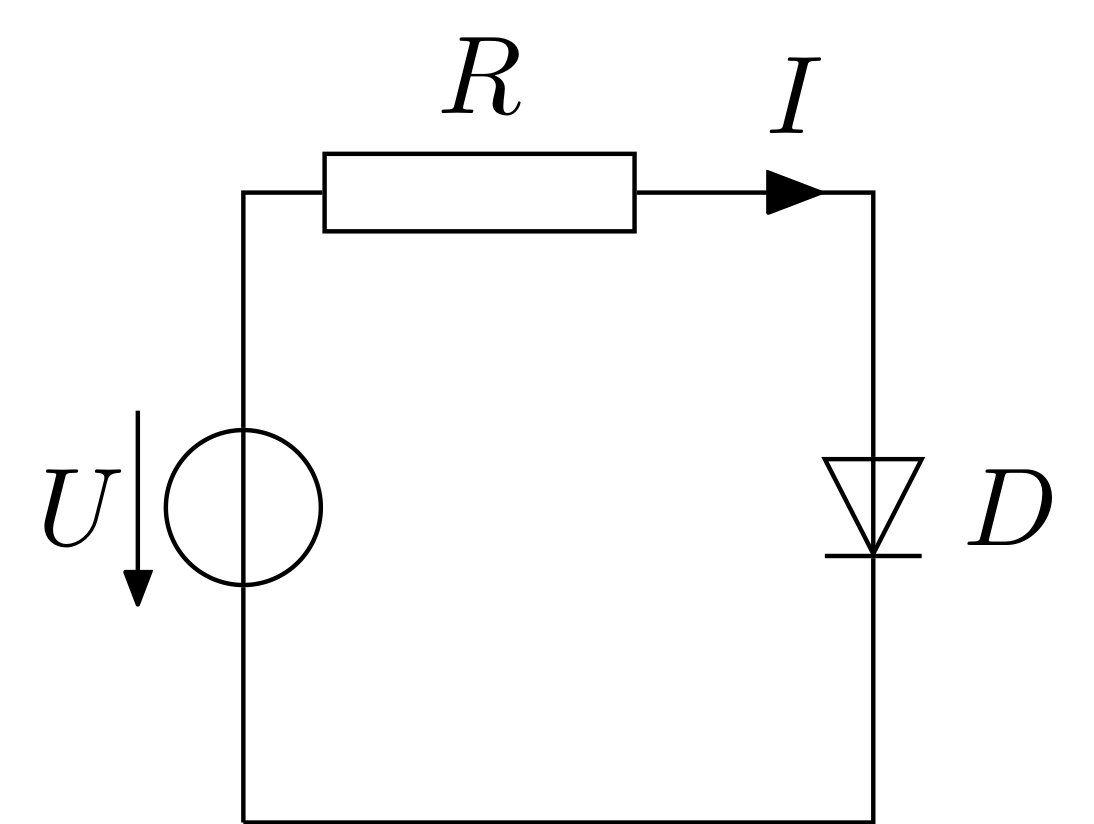 To determine the current flowing through the circuit, \(v_D\) and \(v_R\) need to be defined as functions of \(I\). A simplified Shockley equation will be used to formulate the current-voltage characteristic function of the diode. This function relates the current that flows through the diode with the voltage across it. Both \(I_s\) and \(v_T\) are known properties.

Which can be formulated over \(v_D\):

The voltage over the resistor can be written as a function of the resistor’s resistance \(R\) and the current \(I\):

And by replacing these expressions on the Kirschhoff’s voltage law equation, the following equation is obtained:

To find the solution of the problem, the previous equation needs to be solved for \(I\), which is the same as finding \(I\) such that the cost function \(c\) equals zero, as shown below. By doing this, solving for \(I\) is restructured as a minimization problem. The absolute value is necessary because we don’t want to obtain negative currents.

The voltage of the source is \(10 \space V\) and the resistance of the resistor is \(100 \space \Omega\). The diode is a silicon diode and it is assumed to be at room temperature.

To solve this problem, the global-best optimizer is going to be used.

The current flowing through the circuit is approximately \(0.094 \space A\) which yields a cost of almost zero. The graph below illustrates the relationship between the cost \(c\) and the current \(I\). As shown, the cost reaches its minimum value of zero when \(I\) is somewhere close to \(0.09\).

Unlike pyswarms, the function (in this case, the cost function) to be used in fsolve must have as first argument a single value. Moreover, numerical methods need an initial guess for the solution, which can be made from the graph above.

The best solution value found using the PSO method was approximately the same as the one found using a non-linear solver, about \(0.094 \space A\). In fact, the relative error was less than \(1 \times 10^{-5}\).